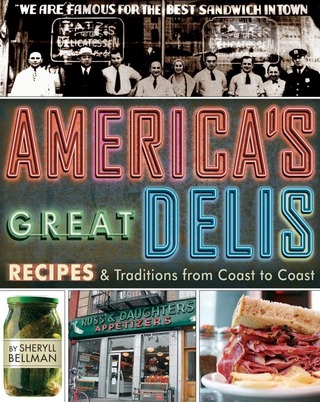 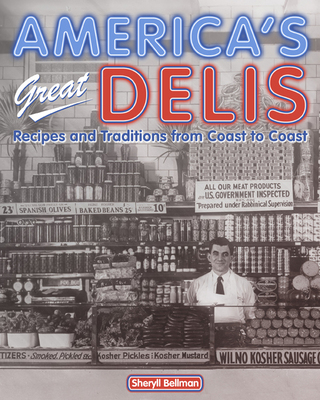 America's Great Delis: Recipes and Traditions
from Coast to Coast

Everyone has a sweet food memory that binds us to our past. The tastes and smells of childhood are among the most powerful of all memories, and evoke a nostalgia difficult to describe. The aroma of matzo ball soup or the scent of brisket with potato pancakes can carry me instantly back to 1950. My most memorable experience was at the counter in my Grandmother’s kitchen. She would roast an eggplant, peel away the skin and while standing over an old earthenware platter, with a large silver spoon in her hand, chop the eggplant for it seemed like hours, adding salt and a little oil until the mass of smooth paste clung to the platter. The fork marks were exact and the salad--sublime. I would wait in anticipation for her to spread some onto a slice of rye bread. I don’t think that I remember ever eating anything this flavorful since. I can see it; I can smell it and I can still taste it. The velvety, soothing flavors of my childhood are what I remember to this day.

Sadly, I did not have the foresight to ask my Grandmothers for a recipe. Most likely, there were none anyway! No one thought to write anything down.

“It’s all in the hands,” they would say.

I wish now, that I had watched and learned from their hands, and since it’s all about instinct, if you were not from the era of cooks that cooked from “sight, touch and smell” then you just aren’t going to get it right!

As I grew up and tried to create the comforting egg custard that my Grandmother would bring to our home for every celebration, I remember asking for her recipe. Her answer to me was, “just put in a little milk and sugar, a little at a time, and a couple of eggs... you’ll know by the way it looks.” I, still, today, cannot make this custard. Maybe it was all in the old glass cups she used!

Much of the cooking that was done by all immigrants from other lands was from memory, from tradition, and from their innate sense of what their native foods should taste like. This ethnic cooking was all about instinct.

While researching the recipes and foods included in this book, I found that it is not an exact science, that you cannot accurately measure and calibrate the ingredients, you just put in a little of this…a little of that... a handful of salt, a bunch of carrots, a pinch of pepper. The way one person rolls the dough for a knish is not the same as the way someone else might do it.

As my grandmother used to say, “You’ll know when its right.”

Along with the foods that the Eastern European immigrants brought to this country, the traditions for the preparation of their foods were indicative of how they lived.

There is a nostalgia shared by many today for a simpler life, a life symbolized by the so called “deli experience.” The changing demographics from the ‘old neighborhood’ delis, to the fact that eating habits have become healthier, have much to do with the fact that the delicatessen is slowly seeping into oblivion. Only a few really memorable ones still exist, but for those who remember and for those who wish to experience the history--this book is for you. With so many of the delis operating with third and forth generation family members, there is a pride in what they do and a love for the life they have inherited.

In speaking with the countermen and deli owners throughout the United States, I received the same answer when inquiring about a recipe--every knish is different from every other knish, some are round, some are square, every kugel differs from place to place, deli to deli, and every bowl of matzo ball soup is special and unique, and no two recipes of the same food ever tastes exactly the same. Sometimes, there was a reluctance to share their prized recipes, and I think that the real reason for this is that there is really no secret at all, and perhaps it’s just that they cannot or will not write anything down! And I make no apologies for the fat content, that’s just not the point. So, take it with a grain of salt... literally!

This is a history book with recipes, showing the richness of Jewish food throughout the centuries. I hope to help to preserve an era that is disappearing and open a new era for those unfamiliar with this unique way of life.

There are both kosher and non kosher delis included in this book. I will indicate when possible the distinction, but the foods that are unique to a deli are often the same, just the preparation differs. Unlike the rule of the mixing of milk and meat, I am mixing kosher and non-kosher recipes!

Enjoy the history and maybe next time when you are biting into a hot pastrami sandwich slathered with mustard on rye bread and your every sense is heightened, your sense of taste, smell, touch, sound and sight, you will appreciate what a legacy was left to us, and maybe, just maybe, someone will name a sandwich after you!